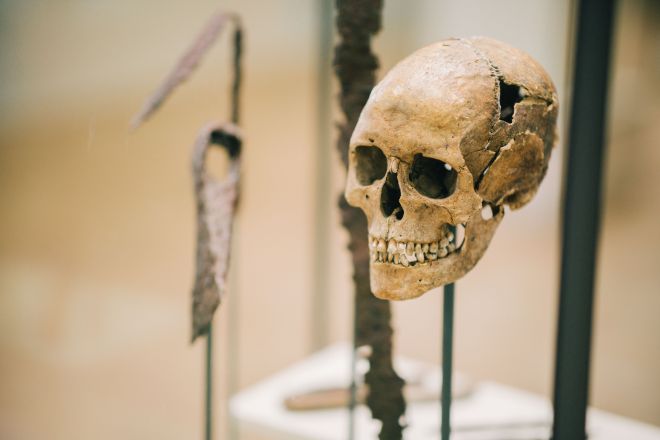 This past week there has been tremendous international interest in female warriors from the Viking Age, primarily because of the National Geographic’s reconstruction (link to The Guardian) of the face from a Viking skull from Nordre Kjølen in Solør. The skull is part of the Museum of Cultural History's collection and currently on display in the exhibition VÍKINGR at The Historical Museum.

The remains of the Viking woman from Nordre Kjølen were found in 1900, and already back then, the experts determined through osteological investigations that is was a woman lying in the grave. This is the only case in Norway where a skeleton osteologically determined as a woman has been found along with weapons from the Viking Age (750-1050 AD). (Osteology = the study of the bones, the bone tissue and the skeleton.)

In Sweden, in Birka outside Stockholm, we find the closest parallel, where it was recently proven by modern genetic studies that a biological woman is buried in one of the richest weapons burials in the area. The Viking Age weapons graves are usually believed to be male, and the result of the investigation has been a renewed discussion of the phenomenon of female Viking warriors both in the press and among professionals.

In light of the ongoing debate, and as part of further developing our knowledge of the deceased from Nordre Kjølen, a number of new investigations of the deceased are currently underway - with technology that the archaeologists of 1900 could only dream of.

The researchers are now conducting an aDNA (ancient DNA) investigation of the deceased, with regard to diet, age, disease history, possible injuries, genetic sex determination and more. The results of the studies will be published scientifically in collaboration with the University of Stockholm, and at the same time conveyed to the public.

The role of women in the Viking Age is a hot topic right now. In the exhibition VÍKINGR, the Nordre Kjølen skull is exhibited with her weapons - does this mean she was a warrior? The Oseberg ship was the last resting place for two women, and women holding swords and spears are also depicted on the amazing looms found among the women's grave goods. This indicates that there was an awareness of women as participants or facilitators in the warrior culture of the time, but it is still unclear whether this means that real female warriors existed, and if so, how “ordinary" they were.

We cannot know who the people in the Viking Age burials in Norway are. There are not many remains to be sampled, partly because skeletons may not have been well taken care of when the graves were opened a long time ago, and people have often been gender-determined based on the things they are buried with.