The Gokstad ship burial from Vestfold in Norway is the largest known Viking Age ship burial. It was excavated in 1880, but was never thoroughly investigated. Gokstad revitalised, a comprehensive research project supported by Anders Jahre's Humanitarian Foundation, will bring out and analyze its unexplored knowledge potential and make it available to the public. 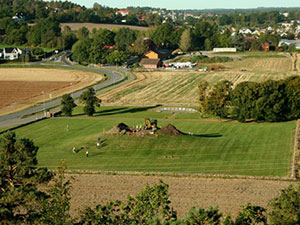 Kongshaugen in 2007, during the recovery of the reburied remains of the Gokstad man. Photo: Anitra Fossum, Vestfold County Muncipality

The Gokstad burial is named from the nearby Gokstad farm. The find was made in 1880, when local farmers started to dig for treasures in the mound Kongshaugen ("The King's Mound") a few kilometers north of the town Sandefjord on the western side of the Oslo Fjord. Alarmed by the activity, the first Norwegian State Antiquarian, Nicolay Nicolaysen, initiated and conducted a scientific excavation of the mound the same year. Apart from a 23 m long, well-preserved ship with a wooden burial chamber built behind the mast, the grave included the incomplete remains of a male skeleton, and of wooden furniture, a sledge, a tent, and equipment for riding, sailing and household. Also a large selection of bones from horses, dogs and fowl was found, and the broken-up parts of three smaller boats. The burial had been looted in ancient times, possibly the reason for the lack of weapons and personal objects. The finds were transported to Oslo, where they became part of Oldsaksamlingen (the Antiquarian Collection) at the University of Oslo, and they are now on display in the Viking Ship Museum on Bygdøy.

Nicolaysen briefly published the find already in 1882 in what was little more than a catalogue. Since then the research on the Gokstad find has been fragmented and focused primarily on individual objects - especially the ship and the boats - and on attempts to identify the buried person in the historical sources. A major reason for this research lacuna is without doubt the magnificent task that the staff of Oldsaksamlingen took on with the excavation, conservation and publication of the Oseberg ship burial from 1903 on. In 1993, however, an important result appeared as the Gokstad ship and burial was dated by means of dendrochronology to the last decade of the 9th and the first decade of the 10th centuries respectively. In 2007 a second important step was taken when the lead coffin with the bones of the Gokstad man, reburied in the mound in 1928, was removed from its stone sarcophagus and brought to the University of Oslo for research and future storage.

The research project Gokstad revitalised was initiated by the Museum of Cultural History at the University of Oslo in 2009, on the basis of a generous grant from the Sandefjord-based Anders Jahre's Humanitarian Foundation. The aim is to bring the Gokstad find into the forefront of current Viking Age research and to increase its value as cultural heritage. Up to now, the find has had an apparently isolated position, both as archaeological monument in the landscape, and as cultural historical phenomenon. Although sporadic archaeological investigations and chance finds since the 1880's have demonstrated that the surroundings around Kongshaugen are rich in other contemporary structures, there has never been an attempt to investigate and analyze the landscape surrounding the mound as a whole. And likewise it has never been tried to look at the entire Gokstad find - the mound, the animals, the objects and the deceased - as a single, monumental manifestation by those who once created it, and to dechipfer what it was that they intended to accomplish. At the core of the Gokstad revitalised project thus stands the goal to create a context around the burial, and to give an archaeological answer to the question Who was the Gokstad man?