The first examination of the magnetometric and georadar data from the Gokstad area has demonstrated a varied pattern of use of the landscape surrounding the mound. 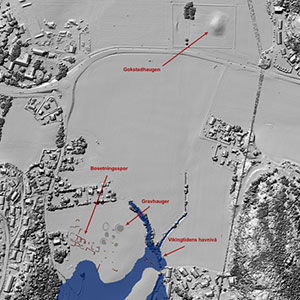 While the areas immediately to the north and the south of the mound revealed few traces of Viking age activities, the southernmost part of the surveyed area - around 500 m to the south, at the Viking age shoreline – confirmed the presence of a workshop settlement and burial area indicated by earlier observations.

Already in 1944 a boat grave had been excavated in this area, and in the 1970s crop marks revealed the presence of four further mounds. The geophysical survey demonstrated an even higher density of burial monuments within the surveyed area, with more mounds to be expected to the east.

The most surprising result was, however, the large number of houses or plot boundaries that were detected with the ground penetrating radar. The majority were found in two rows along a narrow "street", but some other structures, with a deviating orientation, were found to the NW. This confirmed the more restricted data from trenches excavated in the area in 1995, producing a large number of Viking age finds and structures. Interestingly, numerous structures attested to the SE in 1995 could not initially be found in the GPR data.  It remains to be seen if the full analysis of the data will change this.

Further GPR investigation of the settled area is planned for May 2012, this time using equipment with an 8x8 cm resolution, rather than the 25x25 cm resolution used initially.

By Jan Bill
E-mail this page