The fold-processing of bog iron

We started making the replica axe from spongy blooms of bog ore iron. This had to be refined and turned into forgeable iron, which proved to be an extensive job. 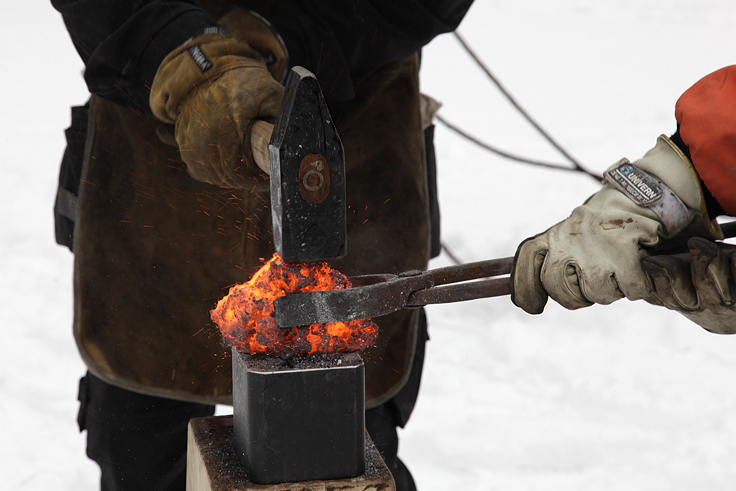 The extraction of crude bog iron, or the making of so-called sponge or bloom iron, was not a process we conducted as part of this project. The sponge iron was acquired from a group of people who have been working with iron extraction for years, Tom Haraldsen and Jens Jørgen Olesen being important contributors. When we started our work, we had five blooms of iron available to us.

Before we could use the blooms to forge the axe, they needed processing. Pores and pockets in the sponge-like blooms contain a glass-like substance called slag. Bog iron may contain as much as 50% slag after it has been smelted (Jylov 2009:123). These impurities cause the formation of fractures and cracks if you try to forge the bloom straight away. In order to refine the iron, we had to remove much of the slag, the voids had to be closed and any remaining slag had to be stretched out and distributed as finely as possible.

We used a folding and forging process as our chosen method to remove impurities and consolidate the bloom iron. This proved to take large parts of the project period and vast amounts of charcoal. The first couple of times we heated the bloom, the largest pockets of slag would liquefy and flow into the forge. Much of the remaining slag was hammered out during the forging process that followed. After each iron bloom had been compressed and the pores eliminated by forge welding, it was hammered into a bar. The bar was then folded over in the middle and the two ends joined by forge welding, forming a thicker bar. The bar was then lengthened again by hammering and re-folded. This process of kneading and folding was repeated 4-5 times for every bloom. Finally, we forge welded the processed blooms together to form one large workpiece for forging the axe.

Here you can see pictures of all the iron blooms prior to the fold-processing, and some of the refuse from the forging in the form of slag and hammerscales.

When we started our work, we had 8.5 kilograms of sponge iron available to us, in the form of five blooms. We were planning to use the largest one, weighing 3.5 kilograms, to forge the axe. The bloom had been extracted at a workshop on iron smelting held at Veien Cultural Heritage Park in 2015 and had been split into two halves. Despite the fact that this bloom was rich in iron and well consolidated, it demonstrated poor forging properties when being processed. A number of fractures and cracks appeared – even after repeated fold-processing. This problem may well be associated with the quality of the Modum bog ore that was used for the extraction process. Most of the other blooms had been extracted from Snertingdal ore, and were of good quality. The iron from Veien was therefore “scrapped” and the other blooms forged into a single workpiece for making the axe.

A report from the Veien 2015 workshop can be found here (norwegian text only). The report includes details about ore quality which are also relevant to the other blooms we were using for the axe.

It was somewhat surprising to us that the remaining four blooms, five kilograms of sponge iron in total, proved to be a little short of what we needed for the axe we were intending to make, despite the fact that its planned weight was under one kilogram.

Refining iron and steel by the folding process is a well-known method in Japanese swordsmithing tradition, still alive even today. In Japanese swordmaking the iron or steel goes through 10-15 cycles of folding and forge welding. This amount of hammering and welding means heating the workpiece numerous times in the forge, resulting in oxidisation of much iron surface that falls off during the hammering process, forming thin, brittle flakes. Archaeologists refer to this as hammerscale. In Japanese fold-processing (shita-kitae), which involves more than ten foldings, only 1/10 of the weight of the original piece remains at the end of the process (Inoues 2002).

We folded five kilograms of sponge iron five times and were left with just over one kilogram. We would have preferred to fold it yet another couple of times to secure a high quality of iron before we started forging the axe, but we were running short of time as well as being short of iron. One conclusion drawn is that fold-processing requires enormous amounts of iron, charcoal and time. Admittedly, slag can make up almost half the weight of the bloom of sponge iron, and most of this dross would always have to be removed. Nevertheless, the surface oxidation process expends a lot of iron during the many rounds of heating. We spent approximately five days and 100 kilograms of charcoal in order to transform five kilograms of sponge iron into one kilogram of forgeable iron, consolidated into a single piece.

The substantial waste of raw material, charcoal and time that fold-processing entails, suggests that a better method would be desirable. This is provided by the technique of re-smelting the raw bloom iron.