Determining the hidden sources of human colonisation of Norway 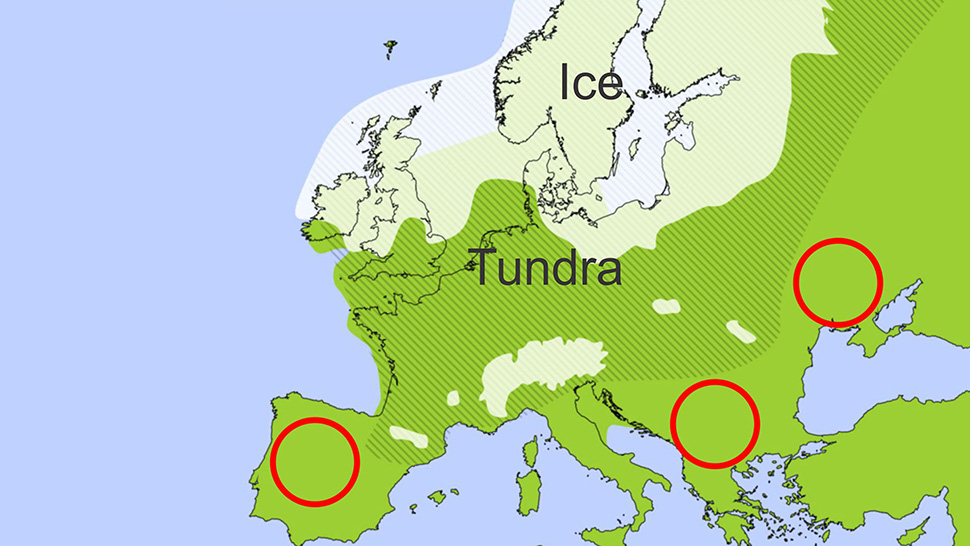 Europe c. 20 000 years ago. Ice and tundra cover most of the continent. Human populations, marked by red circles, concentrated in refugia south and east of the glaciers.

Project supported by the research council of Norway

Norway is one of the very few places in the world where the ancient coastlines and a very early maritime subsistence and settlement pattern are well documented. The area of present day Norway seems to have been first settled at the end of the last Ice Age by people coming along the coast from the south. This is in marked contrast to the known colonisation history of other species. Several species have a two-way colonisation pattern into Scandinavia, from different Eurasian refugia where they overwintered the last Ice Age.

This project studies the postglacial human colonisation of Norway. Two sources of information are used:  the technology of tool and weapon production and ancient human DNA. The research is carried out by two postdoctoral fellows: Evangelia Daskalaki (aDNA) and Mikael A. Manninen (technology).

During the last twenty-five years, there has been a tremendous growth in knowledge about the genetic origin of Europeans. Investigations on DNA from living individuals has led to many, partly contradicting, results. Modern DNA reflects the result of successive processes, colonisation that occurred in prehistoric times amongst them. Direct investigations on DNA obtained from bones and teeth from Stone Age humans can clarify this picture and our project strives to investigate up to 10 000 years old human remains in order to trace the genetic origins of the earliest population in Scandinavia.

Stone tools and waste from their production are the most numerous artefacts left by the early postglacial pioneers. Stone and bone tools were often manufactured following traditional production methods and characteristic operational sequences, which can be used by archaeologists to study group affiliation of the producers. Our project aims to investigate the origin and spread of technological traditions in order to trace the cultural origins of the earliest population in Scandinavia.

This combination of research avenues will contribute to a better understanding of the way Scandinavia was colonized in the early postglacial.

Per Persson
Researcher, Department of Archaeology

Pioneers of North-Western Europe. Determining the hidden sources of human colonisation of Norway