Church and Money will explore the intersection of two powerful axes, the church and money, in the formative period during the 10th and 11th centuries. The projects approach is interdisciplinary and research will evolve around themes such as the church and its use of money, ritual use of money, ecclesiastical minting, money in medieval scripture and money and beliefs in 11th and 12th century society. 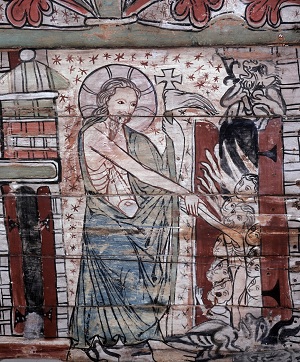 The ritual use of money was a collective phenomenon within pre-Christian and Christian societies all over Europe. The forming of a Christian identity was a process introduced from above in Northern European societies from the 8th to 11th century.

In the process of replacing the Old Norse pantheon with an almighty Christ important changes in rituals took place. Peasants, townspeople and aristocracy all over Western Christendom would flock to mass and place their offers on altars, in offering trunks, boxes and bags. In search for salvation rich and poor made gifts to the church, which by the end of 11th century had become the most sophisticated organization in Europe, and later in the Middle Ages also would become richer than any other medieval institution.

Found beneath the floorboards

Archaeological evidence is the only sources where ritual uses of money can be observed in detail, and is, in this way, the prime source for producing new knowledge about this widespread phenomenon. The ritual use of money conducted in pre-Christian society are found in graves, buildings, waters and as jewellry. In Christian medieval society the phenomenon of money in ritual use is attested in numerous churches were coins has been retrieved from beneath the floors during archaeological investigations. This can be observed in the whole of Western Christendom, and have increased in numbers during the twentieth century, and especially in the post-war period, when there has been a closer surveillance of antiquarian finds.

Today we know more than 70,000 single finds of coins from Scandinavian churches alone, and the total number for Europe is much greater with an emphasis on church finds in Central Europe. The phenomenon of coins in churches and other Christian settings as a phenomenon became a centre of focus in Scandinavian research since the 1950s and onwards. Even though being one of the longstanding debates of archaeology and numismatics, it more or less came to a standstill during the late 1990s, leaving several possibilities unexplored.