The island of Naxos in the Cyclades has for long been renowned for its rich Byzantine heritage, and in particular the numerous, decorated churches. The settlement pattern of Byzantine Naxos has been far less studied. In 2010 an archaeological team from The Museum of Cultural History and the Department of Archaeology, Conservation and History at the University of Oslo initiated a pioneer project of mapping and documentation of the most important of these centres, Kastro Apalirou. 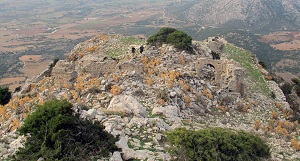 The documentation of standing structures at Apalirou came to conclusion in 2012, with the discovery of a new byzantine church as one of the important results. A study of the economic significance of the byzantine churches on Naxos will form part of the Religion and Money Project at the Museum of Cultural History from 2013. It will also build on and be integrated with the Norwegian Naxos Survey - a collaborative project with Institute of archaeology, conservation and history, UiO.

Naxos as a whole has a unique corpus of 148 byzantine churches many of which had their origins between the 6th/7th and 10th centuries. The early date of many of the churches, coupled with the results of recent ceramic surveys has the potential to provide clear archaeologically derived evidence of the landscapes and settlements of Naxos before the middle Byzantine period. Such evidence is found nowhere else in the Byzantine world.

Two churces and a monastery

Among the documented settlements of the Byzantine period, Kastro Apalirou in the southern part of the island stands apart. The project’s survey of the site has documented more than 75 houses, two churches, a monastery, between 40 and 50 cisterns, city wall and fortifications, internal road grid and drainage system. It is now evident that this was a town of a considerable size and very likely the main administrative centre of the island in the Byzantine period.

The settlement pattern as well as the churches provides a unique situation on Naxos. The main administrative centre was moved during the sixth century from the coast to the inland. The same period witnessed an unprecedented establishment of churches mainly located away from the coast. These changes must have had a massive effect on the economy on the island. A shift from a maritime, trade-based economy in a chiefly self-governed city, to an agrarian-based economy based on self-sufficiency in the inland and with a settlement under strong direct influence by the Byzantine power in Constantinople. The relocated central power in combination with the byzantine churches can be studied as mediators of belief, power and economy in the landscape. The unique situation makes Naxos a laboratory to investigate the very change from late antiquity to the medieval period. 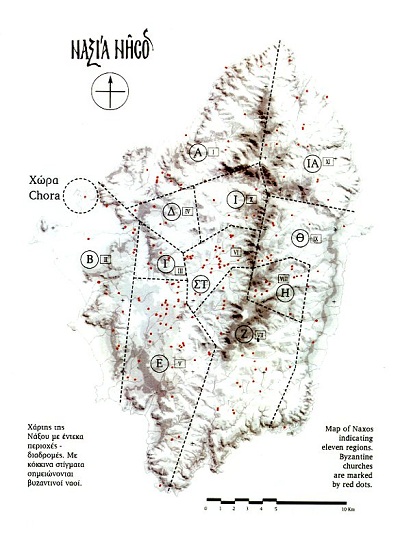 Distribution of churches on Naxos in the byzantine period