The Historical Museum and The Viking Ship Museum are closed until further notice.
UiO Museum of Cultural History
Main navigation
Back to uio.no
Sub navigation Menu
News > He folded out the Viking Ship - and won the competition 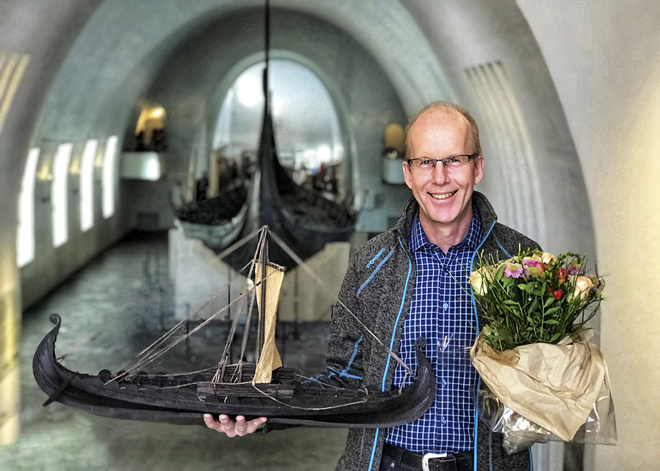 The Norwegian Museum of Cultural History’s competition to guess the weight of the ship has created huge enthusiasm. For three weeks the public have been betting on the weight of the world’s most beautiful Viking ship, and their proposals have been flooding in.
However, being an engineer with a head for mental arithmetic is obviously an advantage when it comes to calculating the weight of something. After giving the matter some serious consideration, Carl Olav Staff thought that the Oseberg Ship would weigh 4,226 kg - just 7 kilos short of the right answer, giving him a decisive victory.

“This competition got me going. Being a construction engineer I am used to thinking about weights and I wanted to find out how many cubic metres of timber would be needed to make a Viking ship,” says Mr. Staff.

He is now going to have to clear a place on the shelf at home to make space for the top prize - a handmade wooden model of the Oseberg Ship.

Placed the Viking ship flat on the floor

Carl Olav Staff was on a business trip in Poland, accompanied by two colleagues from Selvaag, when they came across the competition on their mobile phones. During a 2.5 hour car journey to the housing giant’s factory to the east of Warszaw they arrived at their individual answers after discussing the matter.

“What did you do to figure out the weight?”

“The competition showed a ship which was 21.5 metres long and 5 metres wide. I thought that the side planks would cover an area of just over 100 square metres if the ship had been folded out flat on the floor. The planks are between 2 and 3 cm thick and I therefore knew that they accounted for 2-3 cubic metres of timber,” says Mr. Staff.

The hardest thing was to guess the weight of the ribs which hold the hull together. He guessed that their total weight would be somewhere between 400 and 500 kilos. Finally he added the weight of the deck, a wooden barrel and the 30 oars which were lying on board.

“Obviously there was a degree of guesswork involved, and I was worried that the weight I had guessed was too low. It’s absolutely amazing that I won the competition,” says Mr. Staff.

Viking ship on the move

In a few years’ time the Oseberg ship will be moving into the new Viking Age Museum. In order to prepare it for its last journey the Viking ship was weighed in January. Using a complicated system, the whole ship was raised one millimetre from the ground and its weight was recorded via a number of measuring points. The final total weight was 4,219 kilos.