The Historical Museum and The Viking Ship Museum are closed until further notice.
UiO Museum of Cultural History
Main navigation
Back to uio.no
Sub navigation Menu
News > Scanning Hundorp with georadar
Norwegian version of this page 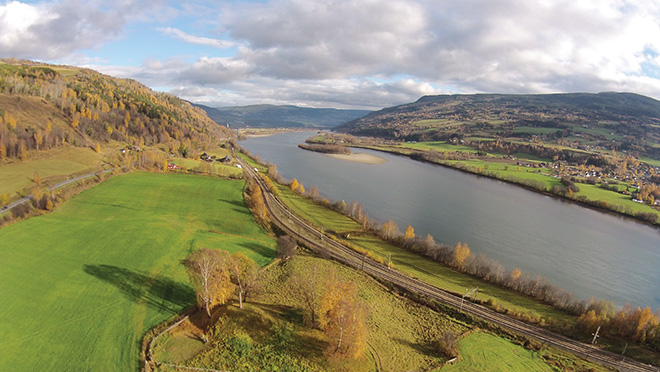 According to Snorre, it was at Hundorp that Olav the Holy christened the valley folk in 1021. We do not know if it actually happened, but the place has more monumental burial mounds than anywhere else in the Inland region. There are many indications that this was an important power centre in the Viking Age, where the Gudbrand dynasty had both religious, political and legal power. "Gudbrand of the valley" was one of the most powerful chieftains in the pre-Christian political landscape. Still, we know very little about this place today. Few archaeological excavations have been carried out in the area, and we do not know much about the burial mounds.

A research collaboration between the Museum of Cultural History (The Viking Ship Museum), the NTNU Science Museum, the Inland County Municipality and the Sør-Fron municipality now gives us the opportunity to gain completely new knowledge about Hundorp in pre-Christian times. What kind of place was this really? A thing site, a place of worship, or just a chieftains manor?

The project will run over two years and try to map the cultural heritage field, but without resorting to major physical interventions. Both geo-radar, metal search, drone photography and point surveys will be conducted. Are there more graves hiding beneath the surface? Is it possible to find buildings, a trading space, or gathering sites? We will try to find answers to some of these questions starting this week, beginning with scanning one of the largest mounds on the site. Is it intact? What is hiding inside?