The Historical Museum and The Viking Ship Museum are closed until further notice.
UiO Museum of Cultural History
Main navigation
Back to uio.no
Sub navigation Menu
News > The Gokstad viking ship is sinking 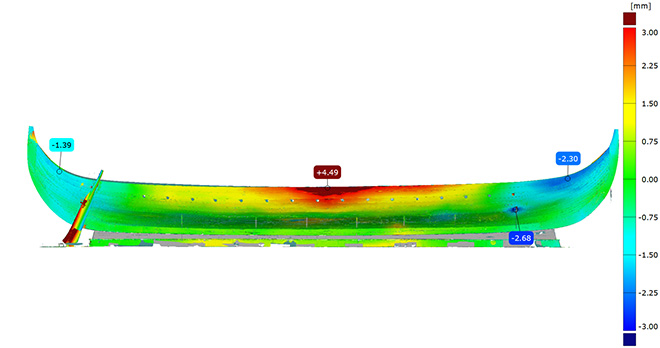 This spring, the Museum of Cultural History (KHM) carried out 3D scans of the entire viking ship. The results have been compared with a similar scan from 2013, revealing worrying developments in the past five years:

– “The scans reveal movements of up to 5 millimetres over the last five-year period. The readings must be examined more closely before we can determine the cause with certainty, but we are quite certain that the root cause of the problem is the fact that the ship has not been adequately supported. It is disturbing to see such big changes in such a short time”, says museum director Håkon Glørstad.

The viking ships are currently subjected to significant temperature fluctuations and variable air humidity. Vibrations in the floor have also been detected, and the supporting structure around the ships provide an uneven weight load causing the ship’s boards to crack.

A new museum is essential in order to be able to properly secure one of Norway’s most iconic cultural heritage artifacts, and it caused a strong reaction both nationally and internationally when the Norwegian Government did not prioritize this in the State Budget for 2019.

– “It is impossible to create support systems that ensure proper support of the entire ship’s hull in the current premises. There are vibrations in the floor, and the space around the ships is too narrow to build the necessary supports. Only in a new building will we be able to guarantee total stability for the ships”, says Glørstad.

Internationally, there is tremendous interest in the Viking Age, and the The Viking Ship Museum is Norway’s most visited museum. Every year, more than half a million visitors from all over the world come to experience this world heritage artifact at Bygdøy.

In recent years, the Museum of Cultural History has initiated several urgent steps to secure the ships temporarily. Both the stem post and the tail post of the Gokstad ship have been provided with new supports in 2018 and 2019.

– “However, urgent temporary support solutions and quick-fixes do not solve the problems with the ship’s stability. On the contrary, we run the risk of moving the problems around instead of solving them”, says Håkon Glørstad.

The findings from the most recent 3D scan reinforce these concerns.

– “The findings show that the time aspect is of vital importance in this case, which emphasizes the need for getting a construction grant as soon as possible”, says Glørstad.