In 2016, the Museum of Cultural History received a collection of photos, artifacts, and manuscripts after the Norwegian traveller and tradesman Oscar Mamen. The museum soon started the work to digitize the collection for research purposes. Even before it was given to the museum, the collection had received wide international attention. 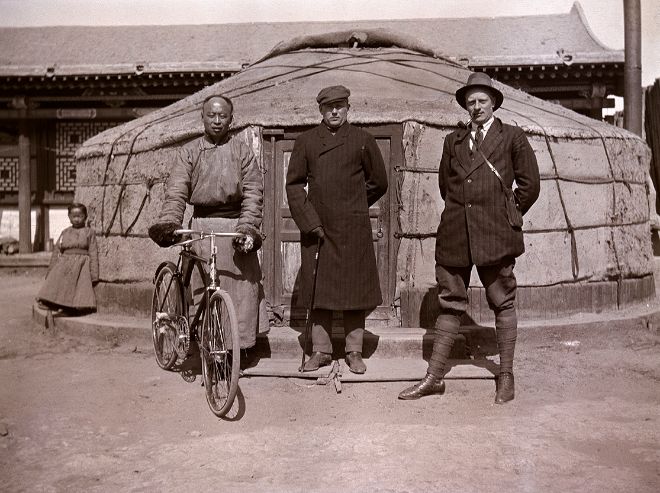 Oscar Mamen arrived in Mongolia for the first time in 1911. He originally came to promote cigarettes from the American Tobacco Company, but he soon realized that the Mongolian people preferred their traditional tobacco pipes. Thus, Oscar Mamen got plenty of time to do other things, like learning the Mongolian language and experiencing Mongolian every day life and festivities. He learned several languages, worked as local guide and consultant for the mongolian elite and international interests. Oscar Mamen hunted both wild animals, cultural events and ethnographica. He brought modern cameras on his journeys and took many photos. Most of the photos from Mongolia are taken between 1911 and 1923, a special decade in Mongolian history.

Only weeks after his arrival, the Chineese Qing dynasty, which had governed Mongolia since the 17th century, fell. Between 1911 and 1923 Mongolia was an independent state, and traditional culture flourished. In 1923, Mongolia became part of the Soviet world, and much of the Mongolian culture was surpressed. Tradition should no longer be practiced. Mongolian shamanism and Buddhism were prohibited. Sometimes, material culture was destroyed or burned.

Ever since the collapse of the Soviet Union in 1990 Mongolia has tried to find its cultural roots. Unfortunately, little material culture is left. Few inhabitants of that time could write and the access to photographic equipment was limited. This is the reason why collections from European travellers who documented Mongolia from 1911 to 1923 are highly valued by both Mongolia researchers throughout the world and by Mongolians themselves.

When Oscar Mamen died in a car crash in 1955, he left a rich collection of photos, an unpublished manuscript, travel diaries and 500 ethnographic artifacts. Doctoral research fellow Maria Kartveit is conducting anthropological research on the collection, supervised by Gro Ween at the Department of Ethnography, Numismatics, Classical Archaeology and University History (DENCAUH) and Ingjerd Höem at the Department of Social Anthropology at the University of Oslo.

The interest from abroad reached a preliminary zenith earlier this year. In January 2020, the president of Mongolia, Khaltmaagiin Battulga, conducted a state visit to Norway. The president expressed a special wish to see the Mongolia collection at the Museum of Cultural History. Enthused by the exhibition, president Battulga donated a presidential research scholarship to Maria Kartveit and her research on Oscar Mamen and Mongolia.

In Mongolia, the Academy of Sciences is already working on two coffee table books with the Mamen photos, and pictures of the ethnographic objects. The History Museum in Ulan Bator is planning an Oscar Mamen exhibition in the course of 2020. The Institute of Mongol Studies at the National University of Mongolia wants to translate Oscar Mamen´s manuscript. Almost one hundred years after it was written, Oscar Mamen´s manuscript will be published in Mongolia.

The digitizition of the collection makes it possible for researchers all over the world to study the collection in new ways. The museum of Cultural History in Oslo collaborates with, among others, the Museum of Archaeology and Anthropology in Cambridge, Peter the Great University in St. Petersburg, and the University of Aberdeen.