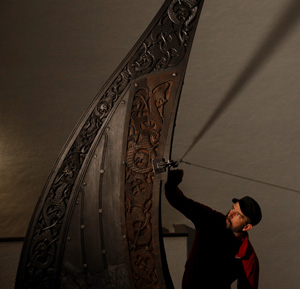 Why do the Viking ships need to be weighed?

The new Viking Ship Museum will be an extension of the building in which the ships are currently located. In order to reach its new home, the Oseberg ship will be moved approx. 100 metres.

If the ships are to be moved safely, they will need to be weighed first. Once their weight has been established the engineers will construct a transfer rig which will protect the ships, but at the same time it will not be so big and heavy that it cannot be moved.

Once the ships have been installed safely in the new museum, a new, improved support system will be constructed in order to ensure that Norway’s national treasures retain their elegant lines for many centuries to come.

Weighing the ships has three purposes

How will the Oseberg ship be weighed?

This ship is currently supported by 25 vertical iron supports along the its sides and beneath its bow. The keel rests on a strong, specially adapted beam.

Strong brackets have been clamped onto the vertical supports. These have been designed so that the weight can be transferred to a digital weighing machine (load cells) located on the floor next to the supports.

The beam beneath the keel has been mounted on nine pairs of stiff angular fittings. This beam, and thus the keel, is lifted in the same was as the vertical supports by screwing a nut on a threaded rod running down into the load cells. One turn of the nut raises the ship 2 millimetres, and this is enough to enable us to see what it weighs.

A total of 68 load cells have been installed at 32 separate measuring points.

Although the ship will only be lifted slightly, it needs to be protected against any potential changes in stability. Anti-roll protection has been installed against the sides of the ship. This will bear its weight if the worst conceivable thing happens and the ship starts to roll. In addition, the bow and mast have been secured with wires attached to the walls in order to dampen any unwanted vibrations.

How will the move take place?

It has not yet been decided how the move will take place, but the ships will probably be surrounded by a framework consisting of strong steel beams which will prevent any changes from occurring in their shape.
Any contact points with the ship will be padded and have shock absorbers, in accordance with every rule in the book. The framework will then be placed on wheels or temporary rails and it will be moved very slowly (1 metre per hour?) in order to minimise any vibrations and jolts.