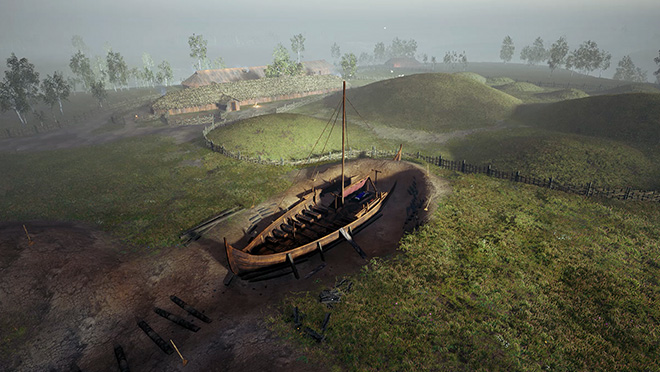 Many of us watched closely during the dig conducted by the Museum of Cultural History and Østfold County Authority (now Viken County Authority) at Gjellestad outside Halden last fall, and it was a joyful moment when the archaeologists succeeded in finding the ship's keel. Now they have examined the keel, and it has provided quite a few answers. At the same time, new questions have emerged.

It is not possible to determine exactly how old the ship is, because parts of the wood on the part of the keel the researchers have extracted are missing. However, the archaeologists' examinations show that the timber in the ship was chopped after the year 732, and that the grave can thus probably date to the period between the late 700s and the beginning of the 900s.

- This is the first half of the Viking Age, and it indicates concurrency with the other major ship finds we know in Norway. The ship fits into a context we already know, while at the same time it is a new ship that will further complement the story, says Christian Løchsen Rødsrud, who was project manager during the excavations last fall.

Although no remnants of people have been found yet, Rødsrud is sure it has been a person of great significance from the upper social classes buried here.
- Or more than one. There were two women in the Oseberg grave, so it doesn't have to be limited to one, he says.

From what we know today, it is not unlikely that the buried person lived at the same time as the Oseberg women or the Gokstad man. Then, as members of dominant chieftain societies, they are very likely to have known each other, even though they lived on either side of the Oslo Fjord.

What we do know is that the one, or those, buried in the Gjellestad ship lived during troubled times. The community consisted of many kings who sought to establish their position of power. They marked their power with huge burial mounds in the surroundings, the ships were status symbols, and the tradition of being buried in beautiful ships was popular on both sides of the Oslo Fjord. Because of the great ship finds Oseberg and Gokstad, the researchers have assumed that the Viking Age's center of power has been on the west side of the fjord. The discovery of the Gjellestad ship can shed new light on the power relations in Viken.

- The Tune ship was also found in Østfold. This is the second ship we find here, and it testifies to a similar power on this side of the Oslo Fjord. When we put that into perspective, it might mean that it has not been as big a center of power in Vestfold as we previously thought, says Rødsrud.

What is special about the area where the Gjellestad ship was found, is that it is rich in discoveries from many different times, and there has been activity here dating back to approx. 1500 years BC.
- At Borre in Vestfold we see something similar, where a viking grave site is established in an older landscape with monumental burial mounds and large hall buildings. The continuity of Gjellestad seems to be even longer. By comparison, for example, Gokstad, outside Sandefjord, was found in a more pure Viking age environment, says Rødsrud.

Remains of settlement from the same area are dated to pre-Roman Iron Age, about 500 BC. More than 15 graves in the same area are known to the archaeologists, but there have probably been even more. During the Migration Period, around 500 AD, Jellhaugen was built. It is Norway's second largest burial mound, and well visible in the landscape. The area was thus a well-established burial ground when the Gjellestad ship and the person, or persons on board, were buried here.

- There is no doubt that this has been a place of special significance. It has probably been a sacred place, which has evolved from a classic Iron Age society with settlement and burial mounds side by side, to becoming a burial ground only. It has been logical to associate with an already established power symbol in the landscape, when the burying of the Gjellestad ship takes place. By using the same burial ground, the people in power attach themselves to the power in the surroundings, he explains.

With the new Museum of the Viking Age in the starting pit, it is extra exciting with new information about Viking Age graves.
- The Gjellestad ship is part of that story, although it is not preserved in the same way as the other ships in the museum. The Gjellestad ship is likely to have greater value for Viking Age research than it has visual value as an exhibition object. But, knowledge about this new discovery will supplement the story that will be presented in the new Viking Museum, says Rødsrud.

Something that did surprise Rødsrud and the other archaeologists during the excavation was that the keel was different from the other ships we know of.

- It is a lot smaller, but it may look different if we dig out more of the ship. Then we can also find out more about what kind of boat this has been. We have a hope of finding some of the mast. If it is preserved, it could help us determine if we have found a sailing ship, he says.

Both the small boats found in the Gokstad grave and the impressive Oseberg ship were built in western Norway. Studies of the keel from the Gjellestad ship show similarities to the wood in these boats, so it is likely that the ship at Gjellestad also was built on the west or southwest coast.
Examinations of fragments from two ships found on Karmøy could contribute to an even more precise location of the Gjellestad ship.

- If we are going back to do more research at Gjellestad, then there is hope that we find more wood, so that we can clarify both the dating and where the timber comes from, says Rødsrud.

Rødsrud still believes that it is possible to make many interesting discoveries in the grave.
- The dig this fall were in the part of the ship with the worst conditions of conservation. We have a hope that there may be something left of the floor panels. We assume that there has been a burial chamber somewhere in the ship, and that at least one person is buried here with items needed in the afterlife. It should also be possible to find traces of some of the extensive rituals that took place when someone was going over to the other side, for example, we may find animal remains after sacrifices. Metal objects will be preserved, he says.
What the archaeologists can expect to find of grave goods depends on whether it is a woman or a man who has been buried in the ship.

- In the grave of a man, we will probably find weapons, in a womans grave probably more jewelry. But both of them will hold household items like buckets, cups and tubs.
Best preserved are probably any precious metal items such as gold and silver. Glass and jewelry stones will also be preserved.

As mentioned earlier, the whole area around the Gjellestad ship is interesting. According to Rødsrud, there are strong indications that the environment around Gjellestad, like Gokstad, also included an important commercial site just a few hundred meters away from the ship's tomb. One of the questions is therefore how much is left of it.
- In this way, the Gjellestad complex as a whole may have the potential to become one of the best preserved Viking Age environments in Norway, he says.

It is not yet clear whether or when the ship will be excavated. But, if the rest of the ship is to be excavated, it is getting urgent. The Gjellestad grave was a burial mound until the late 1800s, when the mound was removed and the area plowed up. Both the removal of the mound and the drainage of the soil in the 1950's or 1960's have worsened the conservation conditions, it has been exposed to air, and the degradation processes have escalated. Rødsrud is clear that it is urgent if one want to excavate the remains of the Gjellestad ship.

- We can't estimate exactly how long the degradation will take, but on the bit of the keel we extracted, the analyzes show degradation on all sides in the form of fungal attacks. It will eat inwards for each year. Droughts like the one we saw in 2018 will also worsen the situation, says Rødsrud.

- If what is left of the Gjellestad ship is to be excavated, it must be rigged for extensive on-site preservation, much is too fragile to be moved. With modern archaeological methods we can get a lot of knowledge, even if it is poorly preserved. The imprints after the boat planks, for example, allow us to make an accurate reconstruction of the ship, says Rødsrud.