Food in the Middle Ages

Legumes, such as beans and peas, are excellent sources for plant-based proteins in people’s diets. These super plants also add nitrogen to the soil which makes it more nutritious, and they are fairly easy to grow. This last point was likely more important for the citizens of the medieval towns. We’ve had access to legumes in Norway for a long time. Broad beans (fava bean) and peas (Pisum Sativum) were in use in the Viking Age. We know from both paleo-botanical and written sources that legumes were grown in rural areas, but the eldest paleo-botanical remains stem from Oslo in the 11th century. These kinds of plants were likely common in the Norwegian medieval towns. 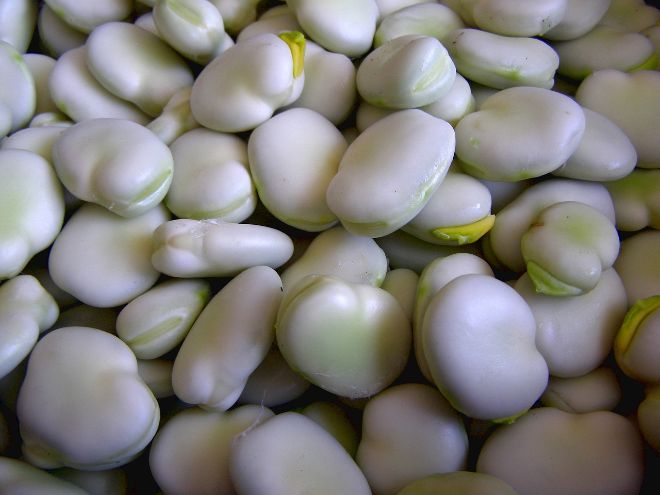 The cultivation of legumes in the towns

Most of the cultivation of beans and peas seem to have taken place on the outskirts of the towns. However, starting in the 12th century, there are traces of broad beans within the town proper in Oslo. Latrines may be something archaeologists are more excited about than most people. This is because of the vast amount of information they can provide, especially when considering pollen and seeds that have passed through people’s digestive systems. As an example, we have traces of broad beans from such a context in the medieval town of Bergen, dated to the 13th century. There are also traces of pollen from legumes in town contexts from the medieval town of Trondheim. We also know that broad beans were grown on the outskirts of Trondheim and Oslo from the Viking Age and far into the Middle Ages.

The use of legumes in the medieval period is not surprising, considering the characteristics of these plants. Beans and peas do not need particularly nutritious soil to grow. These plants add nutrients to the soil by absorbing nitrogen from the air. This makes them particularly useful when using crop rotation as a means to make the most of the soil. If one grew beans one year,  the same spot could be used for a plant that demanded more nutritious soil the next year. Kale is an example of a type of vegetable that would  benefitt from this.

Peas can be eaten both fresh and dried. In a society without electric storage possibilities,  beans and peas were  important food because they could be stored for a long time. There is  an example of this from Oslo, where traces of both beans and peas have been uncovered in the same building dated to the 12th century. This indicates that they were indeed stored there. Another find comes from a cookhouse dated to the 13th century where traces of peas were discovered. Likely, these peas were part of the food that had been prepared in the house. Peas were not only useful in the sense that they could be dried and stored for a long time. They could also be ground up and added to the flour when making bread.

Stone griddles are believed to have been used mostly for baking various types of flatbread. A find from Nordland and Troms in the north of Norway sheds some light on what these kinds of bread could have contained. An analysis of food remains from such a griddle showed traces of fats from milk and vegetables, the latter likely from beans or peas. In this case, such vegetables were likely added to the bread to make it richer.

Just a regular type of food?

We don’t know for certain how important legumes were in the medieval diet. Both beans and peas are mentioned in Magnus the Law-Mender’s State Law of 1274 concerning theft from people’s vegetable gardens. These kinds of laws are seldom made unless there was a problem to begin with. We also know legumes were used in trade. As an example, a bishop demanded taxes from this kind of trade in the latter half of the 13th century. Written sources also show that peas were imported. This meant that even though peas were fairly low-demanding when it came to their soil conditions, the townsfolk weren’t completely self-sufficient.

Cookbooks were only used by the higher echelons of society. As with other vegetables, beans and peas are rarely mentioned in these written sources. They do however pop up as guides for measurements. In these cookbooks, instructions were seldom given. The cook was apparently supposed to know how to do it, but a few cases occur when for example, something must be cut as small as a pea.

Today we know how healthy and nutritious beans and peas are. More important for people of the middle ages , this is food that fills a hungry stomach. Beans and peas were also available and fairly easy to grow, which seems to have made them a common part of the medieval diet.

About Food in the Middle Ages

On this blog, we’ll talk about what kind of food people ate in the Norwegian Middle Ages by shining a light on local cultivation and recipes. We will show results from the research laboratories and exciting artifacts from our collections that tell of a diverse food culture, especially in the medieval towns, which consisted of so much more than just meat and porridge.