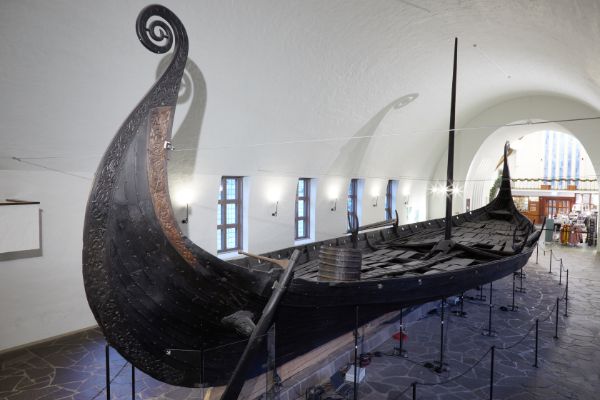 Although it is a long time until we can open the doors to the new Viking Age Museum, preparations are well underway. Just after New Year’s, our conservators began emptying the Oseberg Ship for its content at the Viking Ship Museum. The items that are being removed will not be returned to the exhibition until the new museum is open.

The contents that are being removed from the ship are the ship's deck planks, the oars, a larger barrel and a ladle.

- We will clean the objects of dust, then pack and send them to the magazine at Økern. There they will be catalogued again, and kept until the new museum is in place, says conservator Guro Hjulstad.

In the previous years, the ship has been scanned externally. When the ship is emptied, it must be scanned internally. This serves several purposes:

- Together with the external scan, it is an important tool for preparing the security and relocation of the Oseberg Ship in connection with the construction of the new Viking Age Museum, says Jan Bill, professor of archaeology and collection manager at the Viking Ship Museum.

The scan will also be useful when building the new support system for the ship.

- It will also document the shape of the ship today, so that changes over time can be followed closely in the future, and that any damage can be repaired as best as possible. In addition, the scan will also help to better explore the ship's construction, says Bill.

When the ship is empty, Oseberg and the other two vessels will be vacuum cleaned. This is done annually, and the two days this happens, the museum is closed to the public. This year the vacuuming happens on Wednesday 5th and Wednesday 12th of February. Then we build scaffolding to access the inside, and the vessels are vacuumed with industrial vacuum cleaners with extra long shafts.

Dust is an extensive problem in the current museum building, which was built for 40,000 visitors a year, but now has over 550,000 people inside the doors annually. When planning the new Viking Age Museum, it is a stated goal that the dust load should be less for the vessels, with an air conditioning system that is adapted to the needs of the objects.

The audience will notice that there is a lot of activity around the Oseberg Ship at the Viking Ship Museum these days. Half the wing is blocked to the public, but the ship is still available from the other side.