The Viking helmet from Yarm

Finally this rejected and neglected museum object has been brought into the light, and the Gjermundbu helmet is no longer the only Viking helmet in the world! 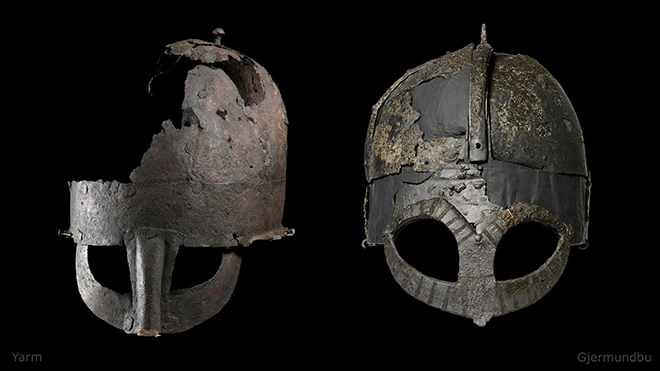 During the 1950s a helmet was unearthed by workmen digging a sewerage system at the town of Yarm in the north of England. This roughly forged and undecorated helmet had a spectacle-shaped face protection. In time it came to be attributed to the Viking Age, but doubts where raised about its authenticity. In recent years a thorough examination of the Yarm helmet has been carried out and earlier this year Dr Chris Caple published an article with the results.

The verdict is fairly conclusive. This is an authentic helmet from the early middle ages, probably the Viking Age. Details of the helmet's design and the metallurgical properties of its iron coincide with what we know of manufacturing methods from that period. We also know considerably more about such things today than when the helmet was brought to light, making it unlikely that a forgery from the 1950s would pass today’s scrutiny. In addition Dr Chris Caple's background from the conservation of artefacts enabled him to investigate corrosion products developed on the helmet while it remained buried. Those findings also corroborated its authenticity.

Being custodians of the Gjermundbu helmet, the only Viking age helmet from Norway and a close relative to the helmet from Yarm, we would like to congratulate England and Yarm on the news of its authenticity!

The Yarm helmet can be found on display at the Preston Park Museum.

The Gjermund helmet can be found at the VÍKINGR exhibition at The Historical Museum.

By Vegard Vike
E-mail this page