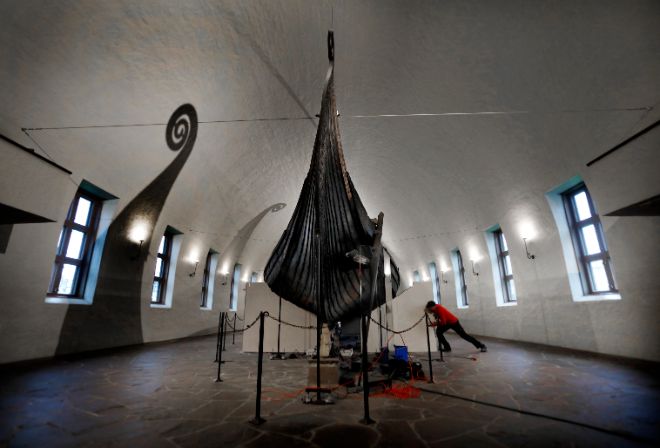 Arnstein Arneberg’s striking Viking Ship Museum on Bygdøy, which was built in 1926 (the last wing was completed in 1957), was designed to accommodate only 40,000 visitors per year. However, during the last few years the Museum has had over half a million visitors each year.

The Viking ships are therefore being subjected to huge fluctuations in temperature and air humidity. Vibrations in the floor have also been detected, and the supporting structures around the ships are creating an uneven weight load causing the ships’ boards to crack. Dust is a significant threat; many visitors in such a small space, a lack of cloakrooms and poor ventilation are causing a lot of dust to settle on the ships. Cleaning the ships is also having a significant impact on them.

A new building is needed

The present day museum can no longer ensure protection of our irreplaceable cultural heritage in the future. As recently as 2012 a government-appointed committee of experts concluded that the worst thing that could happen to the Viking ships would be doing nothing to protect them. During the interim period experts from all over the world have been working flat out to understand how we can preserve our Viking Age inheritance for generations to come. A new building and new supporting structures for the ships will be essential if our rescue work is to be successful. The planned Viking Age Museum will have very sophisticated protection and climate systems which will control temperature, humidity, dust and vibrations, and also provide support for the ships and relieve the pressures to which they are being exposed.

In recent years, the KHM (the Norwegian Museum of Cultural History) has implemented a number of emergency measures designed to provide temporary protection for the ships. In 2018 and 2019 both the stem and stern posts of the Gokstad Ship were provided with new supports. However, these quick support measures and acute solutions are not the answer to the challenges being posed by the ship’s stability. On the contrary, there is a real risk that such acute solutions will mean that these problems are simply being transferred instead of being resolved.

It is not possible to develop support systems that would provide adequate relief for the whole hull while simultaneously protecting against the vibrations being created in the building today. Another important measure which cannot be resolved in the museum is providing protection against earthquakes. Furthermore, the space around the ships is not wide enough to create enough distance between the ships and the public. Only a new building would guarantee stability of the ships.

Structural stability of the ships

The museum’s experts have recorded disturbing changes in the ships over time. Warping is starting to become manifest in plastic deformation changes in the timbers and in cracking.  New cracks are appearing in the ships because the tension levels in their structure are exceeding the tolerance of the materials, resulting in the redistribution of tension and the potential creation of new cracks. A number of new cracks have been observed in both the Oseberg and the Gokstad Ships. Such deformation results in gradual changes occurring over time, and finally in collapse - the ships will simply collapse over their own supports. 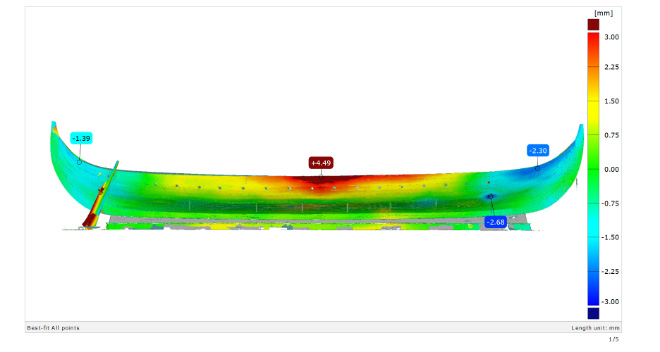 During the spring the Museum of Cultural History carried out 3D scanning of the whole ship. The results have been compared with a similar scan carried out in 2013, revealing worrying developments over the last five years. The strakes on the upper part of the ship at the bow and stern have moved inwards towards the centre of the ship, the upper strakes in the middle of the ship are moving outwards and the underside of the ship is moving down towards the floor. These changes can be traced back to the problems being experienced with the inadequate ship supports.

The Norwegian Directorate for Cultural Heritage is shocked by the state of the ships.

Protection of artefacts treated with alum

There are two main problems associated with the ships, sleds, cart and other artefacts exhibited in the Viking Ship Museum. One of these concerns the artefacts which have been treated with alum and the unfortunate effects that have been caused by this preservation method.

The other challenge applies to those Viking ships which have not been treated with alum. Although the condition of their timbers is better than that of the alum-treated timbers, the challenge posed by these large objects involves maintaining their structural stability.

When the Oseberg Grave was excavated in 1904, part of the Oseberg cart, several sleds and many other artefacts were treated with alum, a method which at the time was the best known method used for preserving heavily decomposed, waterlogged wood.
It has subsequently been discovered that sulphuric acid was formed during the alum treatment and that the wood cells have gradually been “eaten” during the last 100 years.

Under the Saving Oseberg project, the KHM has made considerable progress in developing methods which are designed to stabilise alum-treated artefacts. In addition, funding is required in order to develop such methods and to physically support and stabilise the artefacts and protect them against vibrations until the new Viking Age Museum is ready. Read more about Saving Oseberg.

How we can save our Viking treasures

The Oseberg and Gokstad Ships are the most complete and best preserved Viking ships in the world. However, they are heavy and fragile, and careful adjustments need to be made between the ships, their supporting structures and having a good indoor climate in order to avoid any damage.

The rate of decomposition must be reduced substantially. The Viking ships need a new protection system, and this work was started during the planning process for the new Viking Age Museum. For more than a decade the desire for a new museum has paralysed progress on protecting the collection. In 2018 work ground to a halt due to a lack of funds for the protection project.

The results of the protection project have shown, among other things, movements in the actual Viking Ship Museum which will cause the ships to deteriorate over time. Read more about the plans for the new Viking Age Museum here.