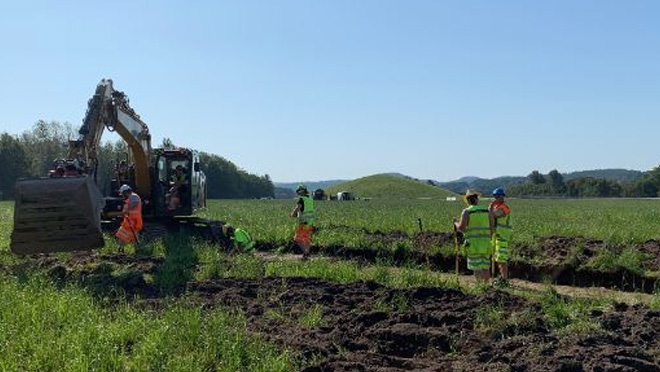 This article will be updated during the ongoing excavations

It became a world sensation when archaeologists discovered a new Viking ship on the farm Jellestad near Halden in Østfold last year. Prior to this, no buried Viking ship had been discovered in Norway for more than 100 years. On Monday 26th of August, the Museum of Cultural History (UiO) and the Cultural heritage section in Østfold County Council started to examine the sensational Gjellestad site in Halden Municipality. The Directorate of Cultural Heritage is providing the project with financial support. Now it is time to find out what the area holds and the state of any artefacts that are found there. Is there anything left of the ship itself?

The ship is not to be excavated, but the archaeologists will dig two trenches towards the middle of the ship, in order to investigate the condition. The measurements show that the ship is about 20 meters long, and thus about the same size as the Viking ships on display at the Viking Ship Museum at Bygdøy in Oslo. It is likely that the ship is in a quite poorly state, but there is hope that parts of the boat are well preserved. The archaologists think it is likely to find remains of wood, animals and objects. Maybe even bone remnants from the people buried in the ship.

The Gjellestad ship was discovered using georadar. In addition, at least ten other burial mounds, and as many as five long houses were discovered in the same area. These areas will also be examined. The area to be excavated is rich in ancient history, there are finds dating back to Roman times in the same field as where the ship is buried.

Approximately 350 ships and boats are estimated to be buried in Norway, of which 13 are regarded as ship burials (vessels over 12 meters in length). In addition, two buried ships have been detected by ground-penetrating radar, one at Borre and the one at Gjellestad. Both men and women can be found in ship burials, but there is currently no evidence to determine the gender of any human remains in the Gjellestad ship. However, taking into consideration other ship burial sites, human remains usually belong to a person of power from an exclusive elite.

Monday 26th of August: The soil has been removed with an excavator, and the work continues down to the relevant soil layers. The archaeologists work downwards by removing ten and ten centimeters of soil, and the soil removed is both sifted and examined with a metal detector.

Tuesday 27th of August: The ship has been found!

On day two of the excavations at Gjellestad, the archaeologists have found two rows of nails, from the upper parts of the ship. The nails were found no more than 30 centimeters below the surface, and there were no traces of wood.

- We now know that the upper part of the ship is poorly preserved. But this is as expected, says archaeologist and project manager Christian Rødsrud. The digging continues tomorrow, and it is likely that the ship is better preserved further down.

Wednesday 28th of August: Today, archaeologists from the Cultural History Museum have spent most of the day emptying the old drainage ditch running through the ship.

- The bottom of the trench is 60 centimeters. Here the masses are sandy, and the conservation conditions are bad. But, as we get deeper than 60 centimeters, we hope for clay where conditions are better. We don't know, but it looks pretty good, says archaeologist and project manager Christian Rødsrud.

Thursday, August 29 - The archaeologists have found clear imprints in the ground of the ship's boards. The wood is broken down and not possible to lift, but clearly visible. (See photo below)
- We also see remains of degraded biological material, perhaps from other grave goods or details on the ship, says archaeologist and project manager Christian Rødsrud.
Rødsrud hopes that the ship can be better preserved under the drainage pipe that goes through the field.
The archaeologists from Østfold county municipality have also today uncovered post holes from a new longhouse in the northwest corner of the earth, as well as several posts that are possibly a fence around parts of the earth. This is an interesting finding, as it is unusual to find such long stretches of bar holes.

Friday, August 30 - Archaeologists have begun digging in the ship.

Today's update from archaeologist and project manager Christian Rødsrud: We have now removed the drainage pipe, and it is very narrow at the bottom of the drainage ditch, so we dig 20 cm into the middle of the ship to find a better place to assess the condition. So now we stand inside the ship and dig. We dig stratigraphic layer by layer to see what is soil, what may be ship flooring or other organic matter. It's going slow, because we have to do this with a spoon. It will therefore take a few days of digging now before we can say anything more about the condition of the ship.

Monday, September 2: Today archaeologists can confirm that like our other major ship finds, also this ship has been looted.

- The georadar images of the ship showed something we have interpreted to be a plundering pit. Today's digging has confirmed this. We have found clear marks from shovels through the masses that were originally used to support the ship, says Christian Rødsrud.

We do not know yet when the ship was looted, but samples from the soil are collected for radiocarbon dating.

- We have also found several fragments of objects, but we do not know what they are yet. But a decorative nail, which may have originated from a shrine, stands out, says Rødsrud.

Tuesday, September 3: Archaeologists at Gjellestad have found what once was a bucket. The picture shows the imprint of the bucket. Half the print is gone due to the old drainage ditch located here. Now the soil will be carefully studied to find out what the bucket was made of, and what has been stored in it. In the Oseberg ship, for example, they found a bucket of apples. The archaeologists are very optimistic about what the next days will bring.

- I have a strong feeling that we're going to make some exciting discoveries as we get deeper into the soil layers, says archaeologist Christian Rødsrud.

Wednesday, 04.September - Archaeologists have uncovered a number of ships rivets representing joints between planks in the ship. So far, they have uncovered 7 board aisles, and expect another two or three before we reach the keel. The distance between the nails is 19-20 cm and represents the width of the table aisles.

At the bottom of the aisles, decomposed wood is also clearly visible, but it is not so well preserved that it can be lifted. The degree of conservation is expected to improve on the deepest table corridors that have not yet been revealed.

- We have also found imprints of what we believe is a plank from the floor of the ship. This one is 24 cm. wide, but cannot be followed to its full length, says archaeologist Christian Rødsrud.

- The wood in the keel is in as good condition as we had hoped, and that means it will be possible to dig out parts later, says Christian Rødsrud.

The big question about what to do now remains unanswered for a while.

Friday, 6. september: Yesterday, the archaeologists discovered that the wood in the keel is in good condition. It is especially the design of the keel that surprises the excavation team.

- Compared to the other Viking ships, this keel is very narrow and thin (4.5 cm wide and 11 cm deep). One theory is therefore that this was a ship for rowing, and not a sailing ship. But we have not seen more than 25 cm of a keel that originally stretched over 20 meters, so it is too early to determine the characteristics of the ship. First and foremost, it is very exciting that we are facing a construction that we do not know from other ships, says excavation leader Christian Rødsrud.

The archaeologists have taken samples from the keel and will try dating it in order to determine when the tree was felled and thus when the ship is built.

The team is now filling the trenches with a clay mixture to make it airtight again.

- Now we are going home to write our reports, and discuss what will happen with the ship in the future, says Rødsrud.