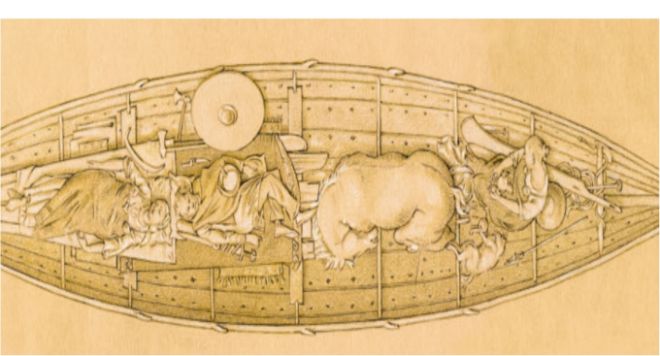 The study of the sacred killing of human beings is an oft-neglected topic in current anthropology. But the reason for re-opening the case for human sacrifice rests on the fact that in the past quarter-century we have obtained much higher-resolution data on multiple burials and their contexts in cemeteries from the early middle ages from across northern Europe, from the Baltic to Anglo Saxon England. These multiple graves are commonly interpreted as deviant burials (of criminals), or as being the by-products of one-off events such as natural disasters, famine, epidemics, war, or an unfortunate accident befalling a group. Most scholars are willing to acknowledge that in some cases at least, the particular pattern of a simultaneous multiple burial indicates a high probability of human sacrificial practices. Usually these cases are addressed through a careful analysis of assemblages, including the condition and position of human remains, and deposition of artefacts loaded with ritual meaning. However, even the most rigorous examinations of these special cases lead to ambiguous interpretations. With no definite evidence in sight, the general response to inconclusive results appears to be to leave the issue of human sacrifice aside, and move on to other issues.  In other words, the determination of the presence of real human sacrificial practices is left perpetually open.

This paper takes a different tack, and proposes that comparative analyses between the multiple graves and wider, more normative single burials in the same contexts can provide even-handed, statistically-based demographic clues that could further support a hypothesis that one or more human sacrifices took place at a given site. A pilot case study of burials at Kaupang emporium, for which we have systematic data, will be presented. Suggested probability models generated could potentially be applied elsewhere in large centres in the Viking homelands such as Birka, Ribe and Hedeby, and beyond, e.g., to Anglo Saxon grave sites, where there is a good deal more general skepticism amongst specialists about the possibility of human sacrifice being present.

Sean O’Neill is Postdoctoral Research Fellow at the Dept. of Anthropology, Aarhus University.

Svein H. Gullbekk is Professor at the Museum of Cultural History, University of Oslo.