The research project Viking Nativity: Gjellestad Across Borders aims to contextualise this exciting Viking ship burial and the Gjellestad site historically and explore its socio-political dimensions. 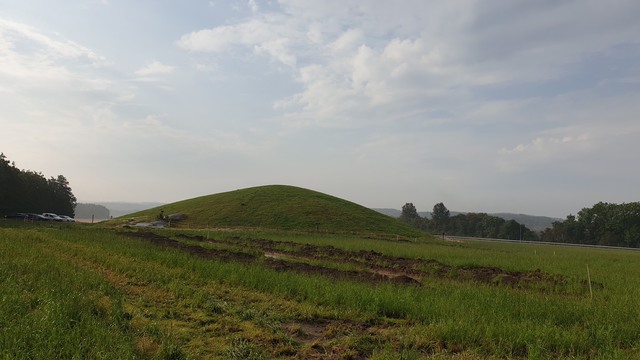 After the sensational discovery through geophysical survey of a previously unknown Viking ship burial at Gjellestad, Halden, the ongoing archaeological excavation led by the Museum of Cultural History has drawn massive international interest amongst both the general public and Viking scholars. The state-of-the-art excavation has produced new data and information that will benefit Viking research in years to come.

The conspicuous ship burial and the still standing proximate monumental burial mound 'Jellhaugen' testify to Gjellestad’s position as a centre of power linked to the upper echelon of society. Located within the fringes of several overlapping spheres of interests in the Viking age and preceding centuries, our understanding of the significance of Gjellestad and what kind of centre it formed remains limited.

Using Gjellestad as a point of departure, a multidisciplinary group of researchers will explore shifting political constellations, involved parties of interests and regional networks in the period 200-1000 CE. What was the political role of Gjellestad? How did different centres of power, social groups and networks interact and affect each other? How was the military capacities within the region organised? How did the upper echelon of society negotiate and manifest their elite positions through symbolic and economical resources and trade? How did Gjellestad- and similar sites- play into the development of regional polities and later kingdoms in Scandinavia in the first millennium CE?

The research group will explore the interconnections of Gjellestad and similar sites with regional polities and political constellations on multiple spatial and analytical scales. Further geophysical survey and prospections will be central to provide new insights of the organisation of Gjellestad’s immediate surrounding landscape and related activities such as burials, settlement, crafts or trade. This will facilitate new understandings of significant developments at Gjellestad in light of its cultural and historical context.

Mari Arentz Østmo, Christian Løchsen Rødsrud and Frode Iversen represent Museum of Cultural History in this research cooperation, while Jan Bill is part of the project's advisory board. The MCH researchers will collate and explore archaeological evidence such as artefacts, heritage sites, maps and place names from the historical landscapes of Ranrike and Vingulmark, that roughly correlate to the areas surrounding the Oslofjord, reaching as far SE as Göteborg in modern Sweden. Their research will target collective identities as they come across in burial contexts and mortuary practices, developments in strategies for military defence and organisation, as well as developments with regard to how power manifested at Gjellestad and contemporary relevant sites, and what role(s) Gjellestad had over time within shifting polities and spheres of interests.

Financed by the Research Council of Norway

The research project Viking Nativity: Gjellestad Across Borders is financed by the Research Council of Norway through the program ‘Researcher Project for Scientific Renewal’ and will run from 2021-2024.

The project is a cooperation between: