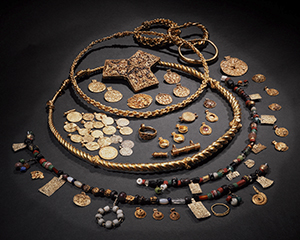 Scandinavia’s biggest gold treasure from the Viking Age was found in 1834 on the farm Hon in Øvre Eiker in Buskerud. It weighs over 2.5 kg and was buried in the last quarter of the 9th century. Photo: Museum of Cultural History, UiO / Eirik Irgens Johnsen.

ViS constitutes one of Europe's largest Viking Age research communities. Our objective is to contribute to knowledge, insight and professionally based dissemination of the Viking Age based on studies of material culture, multidisciplinary collaboration and methodological development. The center currently houses specialists in material and visual culture, numismatics, ship engineering and law data.

The Museum of Cultural History (MCH) has on of the world's largest collections of Viking-Age objects and conducts several excavations of sites from the period annually. An important goal is to activate the extensive and ever-expanding Viking material from the excavations and collections of the MCH. In our perspective, the Viking Age must be regarded in view of wider societal changes, and several projects covers the period from about 550-1200 CE in their research questions. With this in mind, we work with projects relating to mobility and networking, identity formation and social organization, technology and commodity utilization, political centralization and the relationship between Scandinavia and Europe.

We are active partners in collaborative projects, in publications and conferences, and have an extensive network of other research communities in Europe. As part of a research museum, dissemination and communication with the general public is central to our activities. The group's members occur frequently in media, present public lectures and contributes to open public events, and curate exhibitions.

ViS was founded in 2010, and became finalist in the competition of becoming a Center for excellent research in 2012.  In the Norwegian Research Councils Humeval-evaluation in 2017, ViS was considered one of the leading research communities within Humanities in Norway. ViS acts as scholarly resource group for “Project New exhibitions”, in the planning of the New Viking Age Museum at Bygdøy (planned opening around 2025).